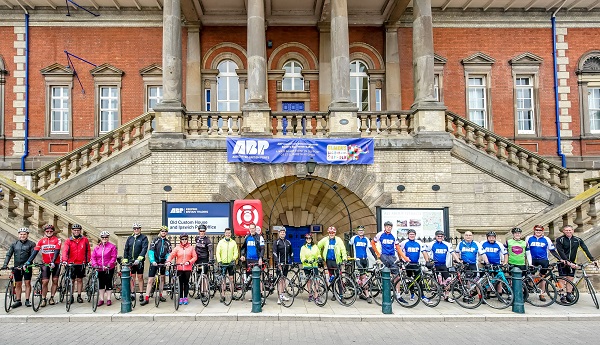 Riders get ready to take part in the ABP Charity Bike Ride to Lowestoft from ABP's Port of Ipswich.

ABP colleagues in East Anglia have recently organised an ABP charity bike ride which saw more than £3.5K raised for St Elizabeth Hospice, the organisers of Elmer’s Big Parade, bringing the total raised by ABP to support the charity to more than £18,000 in the last 12 months.

More than 20 riders in total participated in the race, facing challenging conditions with a head wind and rain as they cycled north towards Lowestoft. During the race, ABP had support from a wide range of local companies, including Fabricon, The Grazing Sheep, Taydal, and a number of customers and partners such as Red7 Marine and Scottish Southern Electric (SSE) which took part in the sports event to raise funds for the worthy cause.

Norman Lloyd, Campaign Manager for Elmer’s Big Parade Suffolk, said: “This is a superb achievement by ABP. It is great to work alongside such a committed and enthusiastic partner, we are very lucky to have them on board.”

ABP Project Engineer Robert Page, who has been involved in the organisation of the bike ride, said: “Bringing such a wide range of local businesses together to raise funds for charity has been a really rewarding experience.

“Organising this event is a further example of how we continue to build relationships with local communities, working with them to support our regions. This follows our support of this year’s ABP 5K Business Challenge, part of the Ipswich Building Society Twilight 5K races, in May, which saw around 1200 runners from over 80 local businesses complete.”