The future of the UK automotive industry

The UK has a proud automotive manufacturing tradition with some of the most efficient factories and flexible workforces in the world as well as an environment where these businesses have been allowed to thrive. With the automotive sector directly responsible for more than 800,000 jobs and vehicle manufacturing for more than 170,000, their importance to the UK economy in terms of employment but also to GDP
cannot be understated. Whilst currently only 44% of components used in the production of UK manufactured vehicles come from suppliers based in the UK this is an improvement on the 33% seen only 20 years ago but far behind the 80% seen in the heyday of UK vehicle production, the 1970s.

Free trade agreements, which the UK will need to negotiate post-Brexit,
stipulate that vehicles must contain a certain percentage of components from the country of manufacture to comply with ‘rules of origin’ regulations. If these conditions are not met, the manufactured vehicles would be subject to World Trade Organisation (WTO) tariffs of 10% making the vehicles less competitive, particularly in the EU markets, which is where over 55% of our UK produced vehicles are exported. 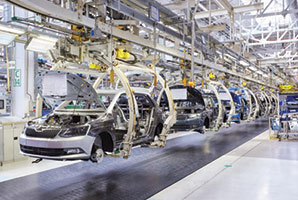 To address this, the UK will need to negotiate an acceptable threshold for UK sourced components, less than the 55% stipulated in the EU trade agreement with South Korea or the 50 rising to 55% with Canada for the vehicle to be considered ‘locally made’.

The detail behind the Brexit settlement will be crucial for the UK automotive industry but with the timescales to rebuild the supply chain too tight to comply with rules of origin regulations, the UK will need to negotiate a deal with the EU that allows the industry to count continental parts as “British” under what are known as principles of “accumulation”.

In the short term we need to make sure that the European parts count towards UK content, and vice versa. Ideally an interim arrangement with our EU partners along the lines of that suggested by Chancellor Phillip Hammond reaching until 2022 will allow the government and
major UK automotive manufacturers to create the environment necessary to rebuild the component supply chain.

If we are to forge a standalone new role in the global economy postBrexit, we need to create the environment which gives us the best opportunity to do this.

One company that has already embraced the need to accelerate the construction of its supply chain is McLaren. The highperformance supercar manufacturer announced in February the opening
a new purpose-built Composites Technology Centre at the North of
England’s Advanced Manufacturing Innovation District in Sheffield.
The ambition is that supply chain companies will start to build factories in the vicinity of the Technology Centre to supply the chassis plant. The Composites Technology Centre represents a significant re-introduction of the manufacturing of car chassis to the North of England, a key objective of Northern Powerhouse and Industrial Strategy policies.

Positive announcements from BMW, where the new generation electric Mini will be assembled at Oxford, Nissan and Toyota with plant investment decisions following government discussions, give rise to the belief that there is sufficient positivity within the industry to overcome
the setbacks associated with Brexit.

Electrification of vehicles also adds both complexity and opportunity in equal measure. With no internal combustion engine to consider, the number of components required in the manufacturing process is likely to reduce. Against this, is the capability to manufacture the battery packs required to power these new vehicles.

One company to forge ahead with this new technology is the Chinese company, Geely, owners of Volvo, who have invested significantly in the re-branded London Electric Vehicle company (formerly London Taxi Company). From its base in Coventry it produces the iconic London cab as a fully electric vehicle and with the range expected to increase to include small commercial vehicles, the production capacity will rise to 36,000 vehicles with over 50% of these being exported. If we are to forge a standalone new role in the global economy post-Brexit we need
to create the environment which gives us the best opportunity to do this.

We need to be honest in our appraisal of what can be achieved both in the period before and after March 31st 2019 and negotiate an interim agreement with our EU partners to allow for the creation of the
supply chain to support this most critical of industries.

Meeting the ‘locally made’ content requirement will need significant
endeavour on the part of both manufacturers and government but if this can be achieved I see no reason why UK automotive manufacturing cannot enjoy an even more successful future than that enjoyed over the last 30 years.