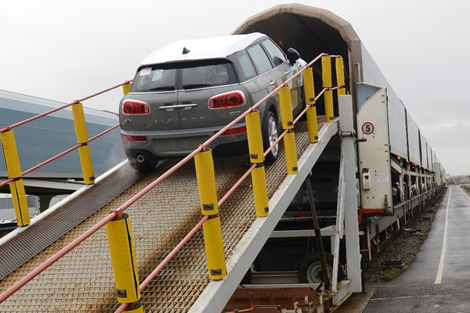 Image Caption: BMW Minis waiting to be discharged at the Port of Southampton

Associated British Ports (ABP), the UK’s leading and best-connected port owner and operator, has invested £300,000 in a new rail service at the Port of Southampton.

This is the first automotive service to operate in the Western Docks, as ABP expands its rail offer at the port to include both the Eastern and Western Dock locations.

Southampton is the UK’s number one port for automotive, handling around 900,000 vehicles a year. Together with customer DB Cargo UK, ABP will now move around 600 to 800 new BMW Minis each week by rail.

Not only does this new service strengthen ABP’s automotive offering at Southampton, it also offers a greener and safer delivery, keeping lorries off the road.

Working together with customers DB Cargo UK, who run the train service, and Southampton Cargo Handling (SCH) who discharge the vehicles, ABP continues to support the national automotive supply chain in Southampton.

Speaking about the new service, Alastair Welch, Director, Southampton, said: “We are delighted to have welcomed this new automotive service to the Western Docks for BMW. As the UK’s number one export port for vehicles, we look forward to continuing to expand Southampton’s automotive offer by rail even further in the future.”

DB Cargo UK’s Head of Sales, Roger Neary, said: “Utilising our fleet of specialised wagons, we currently operate finished vehicle rail movements throughout the UK, as well as international services for automotive components. We are delighted to be working with ABP and BMW to establish this new service into Southampton, the UK’s premier port for the automotive market.”

As the UK’s preferred port for the transporting of automotive, ABP Southampton offers unparalleled rail connections to the rest of the UK.