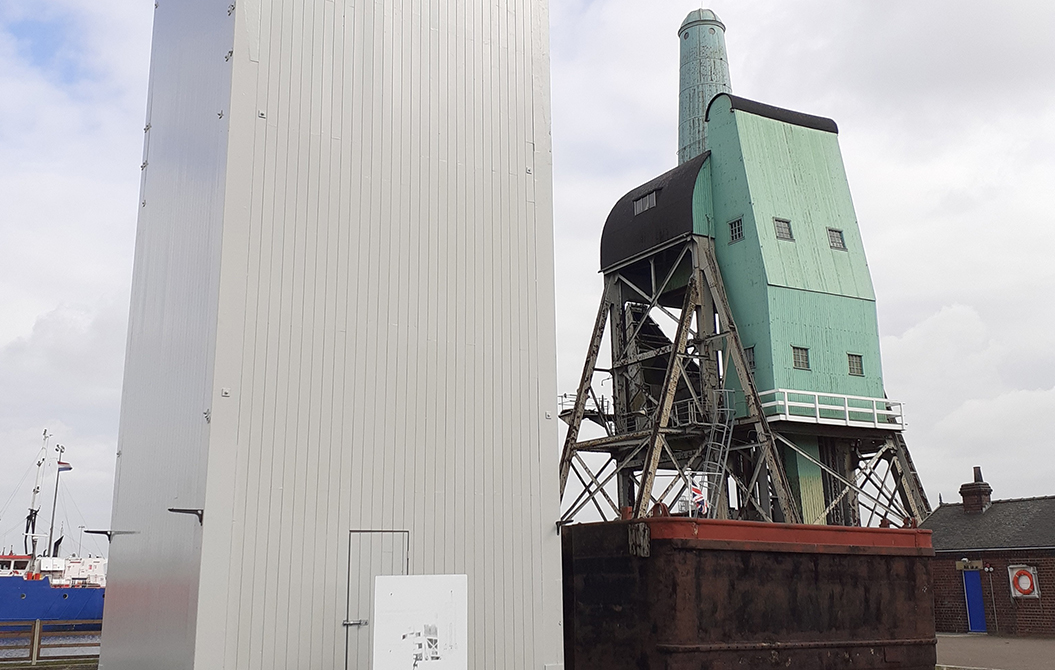 Above: The Restored Accumulator Tower (left) sits next to the No.5 Boat Hoist (right).

ABP has invested £50,000 to restore the Grade II Listed Hydraulic Accumulator Tower on the Port of Goole.

Work began back in January to restore the listed building and was completed prior to the COVID-19 lockdown. Contractors S Voase Builders Ltd used scaffolding to carry out repairs to the main structure and replace the vertical cladding on the 15 metre tall building, finishing off with a fresh coat of paint. The tower has previously undergone a full restoration as it was blown down during a storm in the 1980’s. Only the cylindrical tank that resides inside the lower half of the tower was left standing following the storm.

The Hydraulic Accumulator Tower was built in the mid – late 19th century for the Aire and Calder Navigation. It was last used in 1986 where it provided water hydraulic power to boat hoists, cranes and other machinery on the port. A weighed ram was used to compress water within the cylindrical tank. The inventive mechanism, designed by Sir William Armstrong, was first used in Newcastle in 1851.

Sitting adjacent to the Hydraulic Accumulator Tower, is one of the remaining boat hoists that it once provided power to. The No.5 Compartment Boat Hoist was erected in its current location in 1913 to handle coal from Yorkshire’s coalfields into ships for export. Residing between the two buildings is one of the compartment boats. These would arrive via the canal in a long chain. The hoist would lift the compartment boat, filled with coal, and tip it into the hold of a vessel for export. Compartment boats were also known as Tom Puddings, because they looked like baking tins. The hoist is the last remaining boat hoist of its type and remained in operation until 1986. It has undergone refurbishment with support from Historic England in recent years.

"The Hydraulic Accumulator Tower is an important feature on the port, sitting alongside the No.5 Boat Hoist." Simon Bird Director of ABP Humber

"Both these buildings pay tribute to the wonderful engineering that made the Humber Ports so successful, using renewable energy."