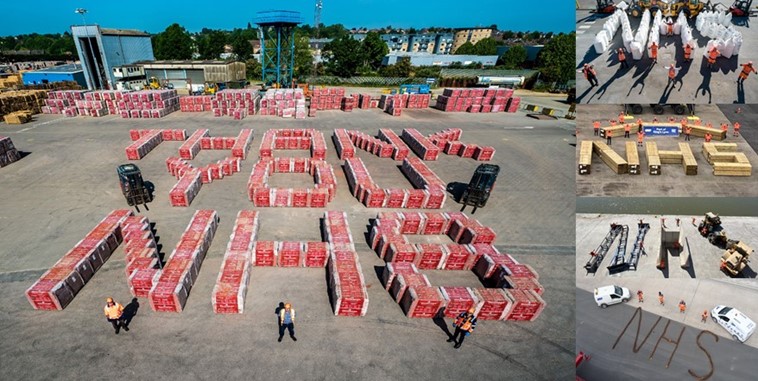 Image caption: ABP colleagues across the UK pay tribute to NHS using variety of materials and equipment normally used or handled at their ports

Since the beginning of lockdown, Associated British Ports (ABP) colleagues across the UK have joined in a mission to express their appreciation for the fantastic work done by the NHS and key workers, including port workers and those working in the wider transport sector, by creating a wealth of visual displays using equipment and materials available in their locations.

This week, the ABP team at the Port of Ipswich used pallets of bricks to create the display. These are handled on behalf of Wienerberger, the world’s largest brick manufacturer who has a regular UK supply operation via Ipswich. The team used more than 220 pallets, which equates to over 142,700 individual bricks to build the display.

“It’s great to see our colleagues at ABP using Wienerberger products to show the appreciation that we all have for the NHS and our key workers. Ian Caddick Sales Director, Wienerberger UK

On behalf of all the team at WB UK we would like to say Thank you, and echo the gratitude and respect of all within the UK construction sector.”

“I really want to thank and pay tribute to all of our key workers who have been in the front line working on the quayside to keep vital cargoes coming in and out of the country. Andrew Harston ABP Regional Director for Wales & Short Sea Ports, who is  responsible for Port of Ipswich

"We have asked colleagues to work from home where possible but the majority of our employees are directly involved in handling goods, which means they need to be physically on the quayside. Our colleagues have done a magnificent job in following safety procedures and keeping the port working at near normal levels. This has allowed our customers to continue operating throughout the crisis and I am very proud of the job that we have done at this very difficult time.”