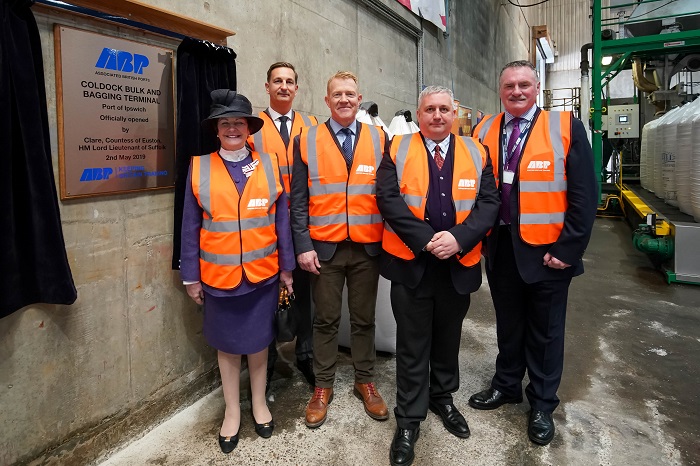 Representing an investment of £700,000, the new plant will be based in the port’s Coldock Bulk Bagging Terminal and will allow COFCO to increase the range of fertilisers offered to UK farmers, develop new products and improve distribution efficiency.

Presiding over the ceremony was Lord Lieutenant of Suffolk, Countess of Euston, Clare FitzRoy, who was appointed as the first female Lord Lieutenant for Suffolk in December 2014. Other guests of honour included BBC Countryfile’s well-known presenter Adam Henson who was the keynote speaker at the event.

The delivery of the new plant marks the completion of the latest phase of a £2 million investment project which has seen ABP create new jobs and purchase two high speed bagging lines, which will primarily be used for fertiliser handling.

“We are delighted to be able to announce this latest investment in value-adding port facilities which will help grow the business of our customers, COFCO International UK.

Together with ABP’s other two East Anglian ports of Lowestoft and King’s Lynn, Ipswich plays a vital role in supporting the regional economy and local jobs and we look forward to continuing to do so in future.”

“The new facilities at Ipswich are key in helping us develop our range of fertiliser products and services to our growing customer-base across East Anglia and into the whole of the UK.

Growers face increasing challenges to produce crops as cost-effectively as possible to meet consumer demands whilst being increasingly aware of environmental requirements.
The modern and highly efficient facilities at the new plant will help us refine our current fertiliser products whilst allowing us to develop and introduce exciting new options including Limus Nitrogen Management, BASF’s latest urea inhibitor technology, to help UK growers achieve greater production efficiency in the future.”