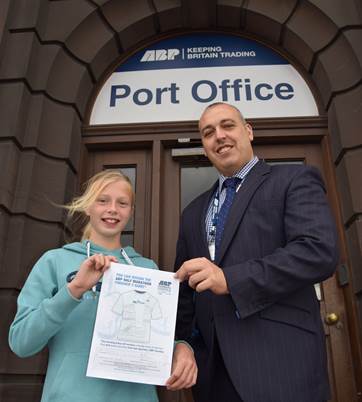 The second ever ABP Humber Coastal Half Marathon is due to take place this weekend, with around 2,400 runners gathering along the promenade in Cleethorpes to beat their personal bests.

Whilst for many taking part, their most rewarding moment will be crossing the finish line after a gruelling 13 mile run, for one young athlete - Eve Bradley, 11 from Humberston - the finish line will be rewarding for different reasons.

It has been announced this week that Eve, a keen member of the Grimsby Harriers Athletics Club, has won ABP’s new t-shirt design competition.

Children up to the age of 15 were invited to enter the competition, whereby they were asked to design a finisher t-shirt for the race, which is due to take place this Sunday 16th September.

With tough competition, port management judges had a difficult time selecting a winner but Eve’s design of a runner passing through a port background, pipped the others at the post.

The prize for the competition has seen Eve’s design being incorporated on to the front of the finisher t-shirts, which will be given out to each person who crosses the finish line this weekend.

Eve also won her family free entry to the St Hugh’s Fun Run, which takes place alongside the half marathon.

On winning top prize, Eve said: “My grandad used to work at the port in Grimsby for ABP so it’s great to win a prize from the company which looked after him for a long time. I’m very excited to see my design on the t-shirt and to help give them out to the finishers.”

Last year for the inaugural race, places sold out within 48 hours and local runners signed on to a waiting list, eager not to miss out.

Having organised a safe and enjoyable event in 2017, the decision was made to increase capacity for this year’s race, where once again, places were snapped up.

Simon Bird, Regional Director for ABP Humber said: “We’re extremely proud to be associated with this highly anticipated event. Runners come from far and wide to take part in the race and it’s fantastic to be able to bring such a buzz to the area.”

The ABP Humber Coastal Half Marathon starts and ends at the promenade in Cleethorpes, taking runners on a journey through Humberston and up to Tetney. As well as t-shirts and medals, and in true seaside style, finishers are also rewarded with an ice cream upon completion of the race.