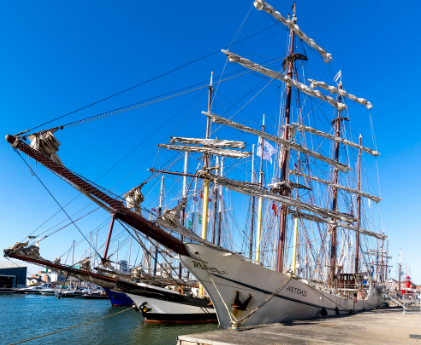 Race of the Classics ships moored on Orwell Quay in Ipswich, October 2018

A fleet of 21 classic tall ships arrived at the Port of Ipswich from the Netherlands as part of the annual ‘Race of the Classics for Young Professionals’, which aims to celebrate and preserve sailing heritage.

The ‘Race of the Classics for Young Professionals’ is held in October every year and sees more than 500 young managers from leading Dutch companies and government participate in events on board classic sailing vessels of all shapes and sizes. As part of the race participants sail and navigate from Veerhaven in Rotterdam to the Port of Ipswich, where the event culminates.

Two versions of the race are organised every year by the Race of the Classics Foundation – one in April aimed at college and university students and a second one in October for young professionals working for a range of different companies.

Since it first began as a small-scale sailing trip in 1989 as the idea of two Amsterdam Academy students, the race has grown into the professionally organised ‘Race of the Classics’ and this is the fifth occasion in the last five years that the race has sailed to Ipswich.

Every year, the event sees a fleet of around 23 Dutch classic sailing ships including The Gallant, Tecla, Twister and Tolkien. The ships vary from 30 to 50 metres in length and include luggers, cutters, two-masters, three-masted sailing ships as well as clippers.

“We are delighted to be supporting this fantastic event which brings a fleet of tall ships and their crews to Ipswich every year and reflects the trading history of the port and especially the wet dock. It is great to see the colourful fleet of tall classic ships moored on Ipswich’s Orwell Quay for the people of Ipswich to enjoy.

“Welcoming the brave race participants after they have skilfully crossed the North Sea has turned into an Ipswich tradition and we hope that the ‘Race of the Classics’ will continue to bring joy to all involved and we equally wish them a safe and speedy trip home.”