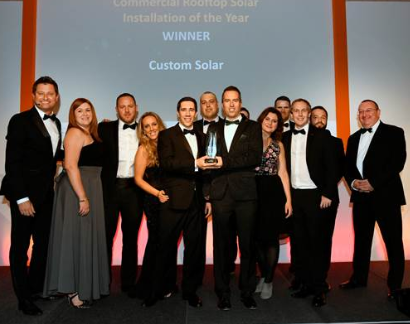 Left: ABP and the Custom Solar team receiving their award for Commercial Rooftop Installation of the Year

In December, ABP announced plans to build a further 20MW of solar arrays across their sites, making the ports operator one of the biggest corporate solar power producers in the UK.

On the Humber, at the Port of Immingham, the company created one scheme on a 30,260m2 warehouse, which now boasts the accolade of being one of the UK’s largest rooftop solar arrays. The site, which went live in April 2018, totals an impressive 4.5MW, enough to power almost 750 homes.

After the Solar Power Portal Awards, held in Birmingham earlier this week, the site has been awarded the impressive title of “Commercial Rooftop Solar Installation of the Year”.

The awards, now in their sixth year, hosted 600 clean-energy professionals from the UK and beyond and recognised Immingham’s site, by contractors Custom Solar, best in show.

The installation, which will make a CO2 saving of almost 1,500 tonnes per annum, will see the port utilise the majority of the generated energy with a small amount being exported from site and back to the national grid.

The electricity which will be generated on site will be used to power port equipment such as cranes, conveyors, lock gates and offices.

In an additional effort to make the ports operator greener and more environmentally friendly, ABP on the Humber has also started replacing all external lighting with lower-power LED bulbs.

“It’s pivotal that businesses in our region are making a concerted effort to reduce their CO2 emissions. As the UK’s largest port by tonnage, we’re extremely proud to be able to work with professional contractors such as Custom Solar, who have enabled us to make a real difference in reducing our carbon footprint.”

“We are delighted that our works have been recognised in receiving this prestigious award for the Immingham Port solar project. It is one of the largest commercial rooftop installations in the UK over recent years and the design, engineering and installation that went into enabling this project to progress was of the highest standard.

It is a well-deserved accolade for everyone involved in what has been a real team effort between Custom Solar and ABP. We are very proud to be working with such a forward-thinking client and we look forward to continuing our work together, assisting them to achieve their aspirations in the deployment of renewable energy solutions across UK ports.”