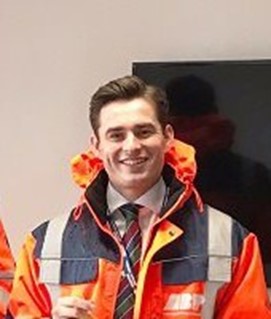 For my first placement at ABP I was positioned in the Humber International Terminal (HIT). The terminal handles over 6.4 million tonnes of cargo annually, is the largest biomass handling facility in the world and represents 24% of the Humber Regions EBITDA – an essential operation to ABP.

It was a great first placement and introduction to ABP. The initial aim of the placement was to understand the operation, customer and cargo requirements. I spent several weeks with each depart, shadowing and getting hands on. This allowed to me to see every aspect of the operation first hand and gain a strong understanding of what made the terminal tick. I was also being included in senior management meetings with the terminal’s main customer, gaining valuable expose to the managerial side of the terminal. Moving forward I was set projects in each department, allowing me to test my knowledge and have an impact on the terminal.

As I spent the initial phase of the placement learning and shadowing the operation I gained a strong knowledge of the safety risks associated with handling the cargo and the severity of which ABP regarded them. I saw safety governed the entire operation and was at the forefront of all conversations and procedures. Looking back this is the main lesson I took from my first placement, quickly setting the tone and culture.

For my second placement I was positioned under the head of engineering for the Humber. I was tasked with conducting my own project surrounding Immingham Container Terminal (ICT). The main objectives were to identify true cost to serve, consider improvements to maintenance regime, identify ways to reduce operational and maintenance cost and increase efficiency.

This gave me the freedom to conduct my own study, collaborate with members of the engineering and ICT team as well as gain an understanding of a container terminal. I really enjoyed the independence of running my own exciting project in a fast-paced container terminal. From the placement I took away a good understanding of container operations as well as the importance of cross departmental cohesion and clear communication.

I am currently conducting my third, out of region placement at Garston Port. Due to the scale of Garston port and recent investments it is an exciting placement to develop skills in port management and port business while learning about a variety of cargos. I am currently working closely with the port manager to map out all operations moving forward. Requiring me to identify the optimum set up, labour and equipment to best serve.

I see the graduate scheme as such valuable experience because throughout my three placements I have had the opportunity to work with terminal, departmental and port leaders while being involved on a variety of exciting and important projects.