Port of Rotterdam extends hand of friendship to the UK

Port of Rotterdam extends hand of friendship to the UK

Mark Dijk, Head of External Affairs at Port of Rotterdam Authority, outlines how the Port of Rotterdam has implemented a number of systems that will support trade with the UK after the end of the Brexit transition period. 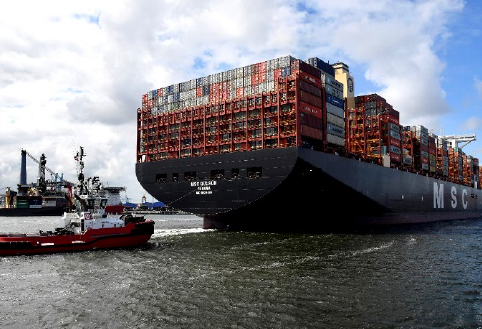 Here we are, nearing the expiry of the Brexit transition period. As of 1 January 2021 – after years without border checks – customs formalities will once again be a fact of life. Are we happy with this situation? No. Do we think it will affect trade between our two proud seafaring nations? Undoubtedly. Will we be throwing in the towel? Of course not. When a challenge presents itself, Rotterdam is known for taking the bull by the horns, and that includes Brexit.

Of the 54 million tonnes of goods traded between the Netherlands and the UK every year, approximately 80% goes via the port of Rotterdam. And most of this volume by far is carried via ferry services to British ports like Hull, Harwich and Felixstowe.

So it comes as no surprise that as soon as the UK withdrawal proved irrevocable, the Port of Rotterdam Authority started carefully analysing the consequences Brexit may have, with a focus on the port’s strengths, weaknesses, opportunities and threats.

We have already combined two of Rotterdam’s specific strengths. The first is that a global port like Rotterdam has decades of experience trading with the non-EU members referred to as ‘third countries’. And our other forte is digitalisation. The Port of Rotterdam Authority is the driving force behind the digitalisation of logistics processes within the port – from port call optimisation to navigation applications for shipping, and from cargo trackers for container transport to the online planning of freight rail connections with the European hinterland.

We have bundled the aforementioned strengths in our port community system called Portbase. Portbase allows shippers, shipping companies, transport firms and – crucial in this specific context – customs authorities to share data, resulting in a very swift and efficient logistics chain. For a number of years already, the international container shipping sector has used Portbase to notify the Port of Rotterdam of incoming cargo – well in advance of the vessel’s arrival. Thanks to this digital pre- notification, Dutch Customs is able to swiftly evaluate and approve import declarations, allowing containers from third countries to be smoothly and efficiently forwarded via Rotterdam to their next destination.

Once it became clear the UK would be joining the group of third countries, it didn’t take a huge leap of the imagination to consider adapting this existing, efficient system to also cover ferry services and short sea transport to British ports. In essence, the system works as follows. In the near future, ferry terminal operators will only allow trucks on board that have submitted a digital pre-notification of their cargo via Portbase. This avoids additional processing time at the terminal and ensures export to the UK can continue to run smoothly – including after Brexit.

At this point, it isn’t entirely clear to us how matters will be organised at the British end and how the Border Operating Model will work out in practice. Undoubtedly, the various new arrangements will take some to get used to. Nevertheless, whatever the future brings, the port of Rotterdam is equipped to handle it.

Port authorities, Dutch Customs and the Netherlands Food and Consumer Product Safety Authority will be working in partnership with Rijkswaterstaat, municipal authorities and the ferry companies to maintain a smooth flow of goods and keep the port accessible at all times. As mentioned above, we also have Portbase, a tried and tested IT system for maintaining smooth crossborder trade – including after Brexit.

Ferry terminals have clear admission requirements, which are that only cargo that has been digitally pre-announced will be allowed onto the terminal site, from where it can be shipped to the UK. As a buffer, we have a number of temporary, well-equipped truck parks in the vicinity of the ferry terminals where shipments that have not yet been preannounced can be prepared by the transport company or cargo owner. In addition, we have drawn up traffic circulation plans that can be used to avoid and mitigate possible congestion threats.

The Port of Rotterdam values its trade with the UK. Let us continue to keep an eye on our joint interests. British and Dutch producers and consumers stand to gain from a logistics process that has as few glitches as possible. Indeed, their livelihood and day-to-day satisfaction as shoppers depend on it. It is now up to policymakers, customs and port authorities, shipping companies, transport firms and all other parties in the logistics chain to jointly tackle this challenge. The Port of Rotterdam wants to be a good partner to our British friends and continue to strengthen the trade relationship between our two nations, and very much remains open for business with the UK.