Kenny Dean, Group Operations Director of Long Rake Spar Co. Ltd, discusses how the company has kept going throughout the COVID pandemic and has even seen an increase in business during these turbulent times. 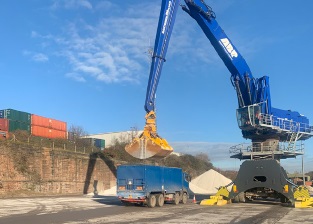 Long Rake Spar is a leading provider of decorative aggregates and supplies a wide range of construction industry businesses including builder’s merchants, landscapers and contractors. With the business first established in 1867, the company has seen the worst the world has to offer in terms of two World Wars and 10 market recessions. The company has always remained strong and as such was well placed to navigate the tricky market situations brought about by the latest pandemic.

Long Rake Spar operates from multiple sites UK-wide. They have three production sites in Derbyshire, East Sussex and Shropshire and a further four dock sites, including ABP’s Port in Garston. These four dockside storage facilities hold in excess of 100,000 tonnes of raw material. There is £2.6 million pounds worth of investment underway at Garston Docks and further investment underway at Rosyth Docks, Scotland to provide additional bulk storage of raw materials. The facilities at the Port of Garston are being enhanced and specifically tailored to the operations at Long Rake Spar and include the addition of sixteen external concrete storage bays and the building of a new 20,000 sq. ft warehouse. This improvement in facilities will allow Long Rake Spar to bring in 60,000 tonnes of decorative aggregates through Garston Docks alone. Garston Docks is a key strategic site for Long Rake Spar.

Not only does this location give us the ability to bring in and store aggregates, but also allows us to meet the demands of the Industrial minerals and powder market with tailored new facilities nearby. This includes tanker loading facilities and a further Warehouse, capable of storing 5,000 tonnes of product undercover.

High volumes of stock are held at Long Rake Spar’s various sites to enable the company to react quickly and dynamically to demand for products. This allows for stock to be pulled to production sites from storage facilities in a calculated manner, reducing costs and from an ecological and environmental perspective, reducing the road miles of the products too. Further expansion and investments are planned at two of the production plants at Rye Harbour, East Sussex and Youlgrave near Bakewell, Derbyshire, which will vastly increase the capacity to produce and store finished products ready for market.

Following the Government's national shutdown of garden centres and some customers also choosing to temporarily cease operating during March and April, the company took the decision to temporarily cease production at one of its sites and furlough the associated staff. The remaining two sites remained open, but with reduced staff to retain an element of stock build and security throughout the business. Shipments of aggregates into the UK were also halted during April and May, due to the lockdown restrictions enforced on suppliers in Spain and Portugal.

Although clearly the national shutdown significantly affected sales across the business, the peak in demand following has seen a phenomenal uptake in orders. This has resulted in record numbers of new accounts being opened and sales increases exceeding forecasts for the year across the group.

ABP’s Port at Garston has been instrumental in the Company’s growth plans, handling incoming cargos from June to the end of October, with a total of 12 shipments berthing. This has contributed an additional £1 million increase in stock holding, to in excess of £5 million across the group. The initial stock holding which was put into place in readiness for Brexit and the further additional increases that followed, have ensured a seamless supply to the company’s extensive customer base. The ability to be fully in control of the supply chain is a fundamental part of the long-term strategy at Long Rake Spar. This has put us significantly ahead of many competitors, who are wholly reliant on buying through UK intermediaries or distributors.

New infrastructure has also been put in place within the company, which has tripled the capacity to produce finished product, with new plant, machinery and extended working hours all contributing to help with this increased demand. In 2021 there will be the further addition of washing and bagging facilities at Garston Docks. This will allow finished product to be produced and stored at dock side, further streamlining operations.

Long Rake Spar continuously looks towards the company’s future success as a leading supplier of specialist decorative aggregates. Identifying strategic dock facilities to serve the needs of the company has been key to securing this success. ABP’s investment in the Garston Docks site, along with their expertise in handling and efficiency, has allowed for us to plan for expansion in import, export and processing, even during the most turbulent of political and economic climates.