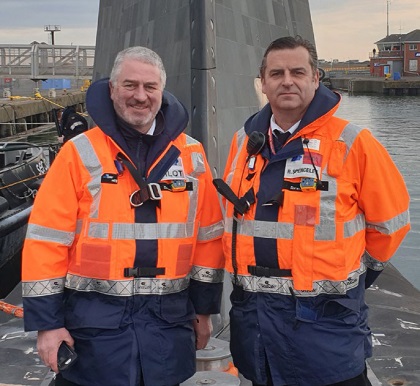 ABP’s Port of Barrow is Cumbria’s Gateway to growth, serving local industry and manufacturing and facilitating maritime trade and hosting world-class shipbuilding. For more than 100 years, the port has also been home to world- class shipbuilding and today is the site of BAE Systems' submarine design and manufacturing facility, supporting the Royal Navy and the UK defence sector.

Five years on from HMS Artful’s exit in 2015, ABP has once again supported BAE Systems in the handover of their latest submarine, HMS Audacious, to the Royal Navy in April 2020. When it comes to high-profile and high-security operations of this kind, everybody at ABP’s Port of Barrow plays their part in contributing to success. From coordinating the opening of the Michaelson Road Bridge to allow tugs to bring the submarine out of Devonshire Dock, to ensuring the three sets of dock gates are in full working order and dock water levels are maintained as required, there are a multitude of tasks to keep ABP’s team occupied. Our Coxswain, Carl Bower, who is also Deputy Harbour Master at the Port of Barrow, has the important task of towing the submarine through the dock using the port’s multi- purpose vessel, Furness Abbey. Our engineering teams ensure all necessary equipment is in working order and the Marine Operators play their part in the smooth running of operations.

“Everybody at ABP’s Port of Barrow plays their part in contributing to success.”

Can you please introduce yourselves to our readers and tell us more about your role at ABP?

RS – Before joining ABP, I had a 25-year career in the Merchant Navy, where I served as a Captain for 10 years. I started working for ABP in 2005 as a Humber pilot and seconded to Barrow-in-Furness as pilot in 2007, working between both regions. I gained Class 1 Pilot status in Barrow in 2014, and worked with Mark Bray on the last submarine exit – the HMS Artful. I decided to move across to Barrow last year when I accepted the role as Harbour Master.

MB – Having started my marine career as an apprentice pilot in the Port of Liverpool 40 years ago, I am now a Class One Pilot, part of the small expert team that drives the largest container ships in the world in and out of DP World’s container terminal at ABP’s Port of Southampton. Prior to this, I worked as an ABP pilot on the river Humber for 11 years, before moving to the Port of Barrow as a pilot and Assistant Harbour Master. Despite leaving Barrow to become a Southampton pilot 17 years ago, I have continued to provide backup pilot cover for the port and have participated in many high-profile projects involving BAE Systems.

What was your role on the day of the submarine exit?

RS – For the exit of HMS Audacious, I acted not only as pilot but also the ABP contact responsible for working with BAE Systems, the Royal Navy and Ministry of Defence to make sure all systems were ready for the big weekend.

This was certainly not your normal port operation as there was a sense of great responsibility that comes with handling one of the world’s most advanced warships, worth over £1 billion. Still, the experienced and hard-working team here at Barrow has been amazing and I’m proud of them. It goes without saying it was a team effort in which everyone excelled in their part. For the two days of the move, Mark and I were on the vessel, Mark as main pilot and I as back-up. I was glued to my phone and email, although the training and preparation we did beforehand resulted in the smooth running of operations.

Do you have any tips on how to prepare mentally and physically for a nationally significant operation like this?

RS – This is the culmination of many hours of training and experience for a pilot. Indeed, to look after the most advanced warship in the UK is a true high point in a pilot’s career. However, I do find that during the actual operation, one becomes so consumed by the practical side that there is no time left for stress. Also, in preparation we take part in regular simulator training with the submarine crews to get a good working relationship so that as much as possible is pre-planned.

MB – The pilots and the submarine crew undertake extensive training on a simulator in Holland as part of the evolution to navigate this high-profile submarine out of the challenging narrow channels of Barrow and get it safely out to sea.

Have you been involved in similar operations?

RS – I have been involved in a similar operation once, with HMS Artful. Realistically, it’s just another day at the office but in reality, it is a feather in the cap and certainly something to tell the grandkids.

In fact, I moved across from Hull to take on the Harbour Master's job in Barrow mainly because of the submarine building programme. To be involved on a basic planning level, not only in Astute but also the future Dreadnought operations is very rewarding considering its importance not only within ABP but also for the country.

MB – I have been involved in multiple operations since the start of this submarine building programme, and this will be my fourth submarine exit. Throughout this time, I have built up valuable experience that helped us make this operation a success.

What advice would you give to anyone interested in becoming a marine pilot?

RS – Learn to give the answer, “No, not airplanes!” when someone asks you what you do.

Seriously, if anyone is given the opportunity to train to become a pilot either through the Merchant Navy route, or via the ABP apprenticeship scheme, I’d say leap at it. It’s different, interesting, very rewarding and offers a way of life that would be difficult to beat in any other profession.

MB – Being a pilot can be very challenging, rewarding and stressful, sometimes all at once. We pilot vessels in and out of ports 24 hours a day, 365 days a year. No two jobs are the same and there is no room for complacency even on a bright and sunny day let alone on a dark rainy night in the middle of winter. The route into piloting is generally by going to sea and gaining maritime qualifications before starting to train as a pilot, which could take many years, but it is a career worth investing time and effort in.

“To look after the most advanced warship in the UK is a true high point in a pilot’s career.”