View from the bridge: our renewables journey

View from the bridge: our renewables journey

ABP’s Head of Environment, Alan Tinline, on how Britain’s biggest port operator is using renewable energy to meet its, and its customers, power needs.

In 2011, Associated British Ports embarked on an ambitious and ongoing project to roll out renewable energy schemes across our 21 ports. The first step was a 10kWp (kilowatt hours peak) solar array which was installed at the Port of Fleetwood.

Since then, the business has steadily increased capacity across the entire group. Today, 16 of our 21 ports have renewable schemes on-site, generating a large amount of power for us and our customers’ operations. Now, we are pleased to say that 12.2% of all the electricity ABP uses – almost an eighth – we generate ourselves from our own wind and solar projects.

These range from wind turbines in South Wales to solar farms on ABP land and, more recently, rooftop solar arrays, which put functional areas, previously just used to keep the elements out, to excellent use as power generation surfaces.

The total installed solar capacity across ABP is currently 15MWp (megawatts peak) with a further 5MW of wind turbine capacity. There is a further 6MWp of solar planned to be installed in 2019 and another 2.6MWp planned for 2020. Currently we have about 55,500 solar cells across the business – or about 90,000m2 of solar panels or, in newspaper language, 12.5 football pitches. This already makes us one of the largest private corporate producers of renewable energy in the UK. By the end of 2020, we expect to have around 90,000 solar cells in operation, covering a combined area of around 146,000m2, or about 20 football pitches.

The price per megawatt hour (MWh) of solar has reduced dramatically in recent times, even during the eight years that ABP has been involved. The cost for solar has reduced from around £130 per MWh to under £100, a reduction of more than 20% in four years and this is projected to fall to around £70/MWh by 2030. So for businesses, it really doesn’t have to cost the earth to help save the Earth.

My personal view is that Government feed-in tariffs made industry look at the potential of renewables and started businesses off on this path. Whether the level of financial incentive remained the same or not, we certainly saw, and still see, the benefits of using renewables, as once we installed it and saw it working, it has embedded into our thinking and future growth planning.

The incentives in the industry really were the kick-start for businesses to consider this course of action, and we took it from there.

The benefits for us are profound. Last year, we made around 19GWh of renewable energy across our business. To put it in context, that is enough to power around 4,750 average UK homes for a year.

We used about 9.25GWh ourselves for our port operations, such as powering electric vehicles, which we have rolled out in Southampton, Ipswich, King’s Lynn,

Lowestoft and Barrow. We also have hybrid cranes in our business now, but really, our renewable energy is used for pretty much anything that requires electricity.

Our customers and port tenants used around 3GWh for their purposes, and the rest, around 7GWh, we exported into the national grid, which helps to decarbonise the UK supply, albeit on a small scale at the moment.

“But it’s not just about reducing the carbon footprint for business. Using renewables drives our operational efficiencies and reduces our own energy costs. Added to that is the independence of supply, which brings added resilience to port operations.”

Of course, we would love to use all of the renewable power we generate, but like wider industry, one of the issues we all face is that renewables create energy often when we don’t need it. For example, solar output peaks at midday, when perhaps people are at lunch, and wind makes power 24 hours a day, even at night, when we are often not operating. Energy storage is the piece of the puzzle that we are all looking to solve. Perhaps that is batteries, perhaps that is hydrogen. We are looking to UK tech to help us find financially viable answers to a few of these questions. Our Port of Goole, for example, could be totally self-sufficient in terms of renewable energy were it not for this link between generation and usage.

ABP has a good deal of land around its ports, but moreover, we have a lot of warehouses, sheds, workshops, covered terminals and so on. So roof-mounted solar arrays are a ‘no brainer’ for us and in Custom Solar, we have found a great partner who helps us to install and maintain.

Wind provides more useful power, and in greater amounts. For example, around 52% of all our renewable energy comes from just three wind turbines across two ports in South Wales (Newport and Swansea).

We have been concentrating on solar at the moment as it's easier and more cost- effective to install across the Port Estate, primarily making great use of roof spaces. Solar also doesn’t have moving parts, so maintaining them is often a simple case of keeping them clean. With wind turbines, the main barrier to installation across the estate is that the planning laws are very difficult to navigate and are often too big a hurdle to getting them installed.

If planning laws were to become more accommodating of wind projects – and we are only talking about small-scale turbines here, not the vast arrays you see offshore, and on port estates, not in residential areas – then I believe more people would install wind for all the benefits I’ve just outlined.

One thing we have learned in our renewables journey is the importance of considering renewables in forward planning. It is easy enough for us to retrofit rooftop solar arrays, but true efficiency and cost-effectiveness come from ‘designing them in’ to new builds. Indeed, any new building projects we consider now have renewable energy and energy efficiency 'baked in' to them. 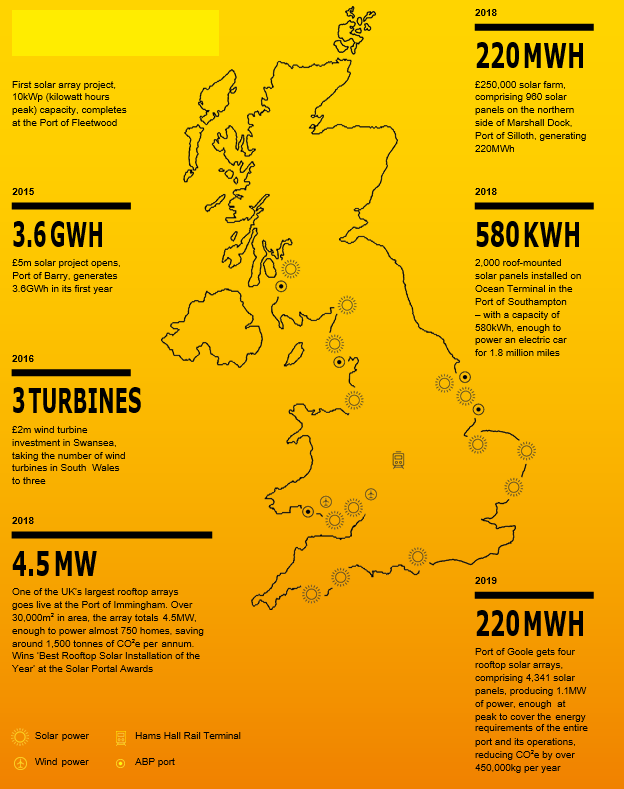 But it’s not just about reducing the carbon footprint for business. Using renewables drives our operational efficiencies and reduces our own energy costs. Added to that is the independence of supply, which brings added resilience to port operations. While our investment in on-site renewable generation directly reduces the GHG (greenhouse gas) intensity of our business, it also allows us to look at new technologies to decarbonise plant and equipment by using renewable electricity, and directly reduces embodied GHGs of products in the supply chain using ABP ports.

As the UK strives toward a net zero carbon target by 2050, we are doing all that we can to make our port operations as renewable as possible and, as ABP is a leading player supporting customers in the offshore wind sector, we are applying a little bit of that industry’s philosophy to our own business. We are serious about a renewable future for port power.