View from the bridge: Drama-based learning

View from the bridge: Drama-based learning

Adam Christopher is Co-Director of multi-award winning drama-based training company ATT. Recognised as ‘best in class’ for their innovative, immersive approach to behavioural change in people and organisations, they work with the construction, energy and logistics sectors

Our work derives from 25 years' experience in UK and global industry, in the public and private sectors, building and delivering drama-based learning to elicit a defined behavioural learning objective.

Every business aspires to ‘zero harm’. It is the only conscionable option – an expectation, not an aspiration. But despite investment in a huge variety of programmes to try to achieve this, it often remains simply a target, rather than an outcome. What’s going on? Why is there a mismatch between the stated aims and vision at board/CEO level and what happens on the ground?

At ATT we’re not afraid to say to any organisation that genuinely wants safety as a core value that they must include their entire workforce in their planning. If they truly want to engender a sense of shared learning with tangible outputs for everyone, each programme should contain a vertical slice of that organisation’s personnel. Our workshops should be delivered to all levels of the supply chain: from the back office to senior, mid and lower management and groundworkers all together. Plant operators workshopping alongside office managers, site supervisors with chief executives, reception staff with resource allocation and procurement personnel – a good healthy mix of everyone that contributes to that organisation’s culture should be present. They’ll learn from each other, and the quality of training must be the same for each group, with the same over-arching messages. Consistency is key. ATT’s focus is behavioural, not procedural – therefore everyone should be involved. ATT believes workshopping this way is more likely to create a common vocabulary and participants are more likely to leave with an accessible set of tools within which to communicate effectively and willingly with everyone at work. Everyone deserves a voice and the confidence to support and be supported by those around them. Everyone needs to understand the actual, not the hypothetical, risks that are out there. We’re proud to be disruptors in this way.

Our work derives from 25 years' experience in UK and global industry, in the public and private sectors, building and delivering drama-based learning to elicit a defined behavioural learning objective. We’ve learned that, to bring about lasting awareness in a workforce about their role in maintaining safety culture, key criteria must be met. Putting senior leaders in a room with staff from all areas, plus partners and suppliers, is critical to developing a shared safety ‘language’. Changing the culture around accepted levels of risk and embedding safety leadership up and down an organisation takes time.

What defines ATT’s brand of drama-based learning? Our approach embraces all three learning styles: visual, auditory and kinaesthetic. We integrate impactful filmed scenarios with live drama, facilitated discussion and interactive safety leadership skills practice. Our prestige production values and attention to detail create believable, authentic scenarios. Creating a situation where participants can identify with what a particular character is thinking or feeling is paramount. Empathy is key. Identifying with characters in both similar and different roles to their own removes the ‘us and them’ mentality. 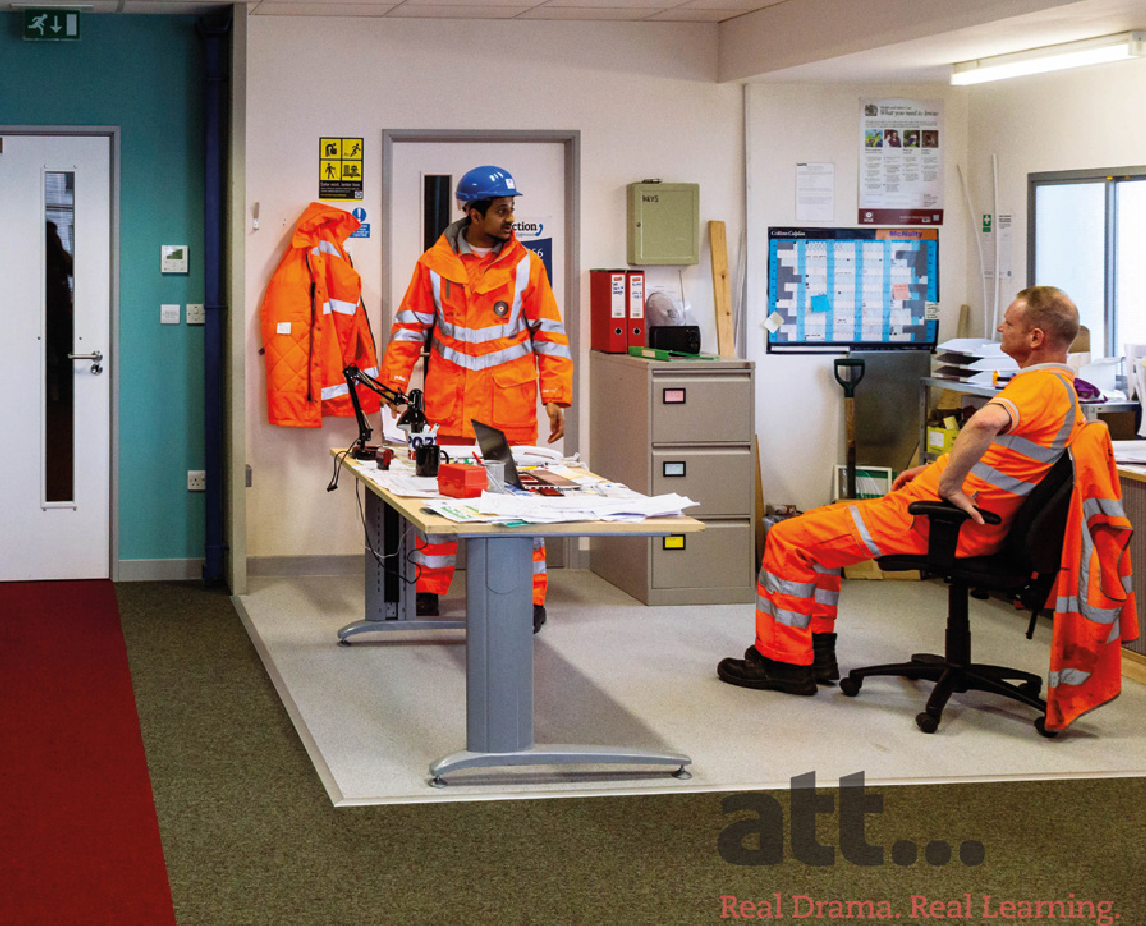 Using dramatic scenarios, we encourage participants to talk to the ‘fictitious’ characters. We listen to what they say and we give them a chance to adapt their own communication styles. We identify the levers in decision-making and the factors that shape our choices: cost, expediency, pressure to win contracts, personal ambition, fatigue and family

life. Encouraging an atmosphere of openness and of mutual support is vital to the success of the sessions – as it is to creating a more harmonious and safer working environment. Our approach is theory-light, practical-heavy with skills workshops tackling both the ‘when’ and the ‘how’ to challenge unsafe behaviour, with many of the skills useful for life far beyond the workplace.

We started the ATT Safety Leadership Podcast 12 months ago. During that period, we’ve heard the emotional and often painful testimony of those affected by incidents which could have been prevented. We’ve spoken to a group of former miners whose colleague was killed ‘on their watch’; a road safety campaigner whose sister died as a result of a short- sighted HGV driver not wearing glasses, and a shift worker whose life was sent off the rails by a ban for dangerous driving as he returned home from work suffering from extreme fatigue. These were not hypothetical scenarios. They are lives changed forever. We are working to help industry learn from this and make ‘zero harm’ an outcome, rather than a target.

To date ATT has inducted more than 16,000 staff at EPIC, the Thames Tideway Project’s induction facility in London, with over 1,000 industry observers also taking part in the day. In addition to EPIC, ATT designs and delivers mobile immersive sessions and workshops both in the UK and internationally for companies including National Grid, TfL/London Underground, Dragados, Orsted, GE Renewables, Eon, Uniper, Eurovia and Siemens Gamesa. @attexperiential