Since releasing its Air Quality Strategy and pledging a series of commitments, the Port of Southampton has been steadily delivering against its ambitious goals, Regional Director, Alastair Welch reports.

Last year, the Port of Southampton outlined its commitment to air quality and accelerating the improvements the port and the city itself have seen in the last decade or so. As an important member of the community, we know that we have a responsibility, not just as a major employer, but also as a neighbour, to be at the forefront of these improvements and do all we can to look after our environment. We published ‘Cleaner Air for Southampton’ – our Air Quality Strategy – in July 2018, more than a year ahead of the Government’s schedule, and were one of the first UK ports to do so.

Since then, ABP has driven various improvements, delivering against our ambitious goals, to schedule. Our network of air quality monitors at the port gives us clear, accurate information, in real time, of air quality levels, allowing us to better understand how we are performing and help guide us as to where we need to concentrate our efforts. Our readings reveal that, one year on, levels of NO2 across the port are at around 30μg/ m³. To put that in context, the figure is well below the UK national objective of 40μg/m³. Whilst this level is pleasing to see, we know we have to maintain it and keep pushing to make our operations as environmentally sound as possible. In our Air Quality Strategy, we presented a series of initiatives to do just that. 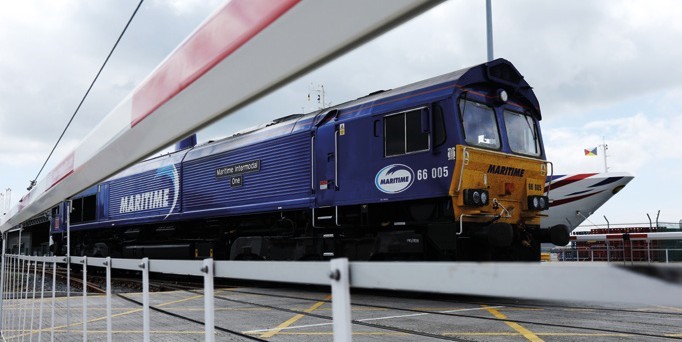 To help manage the emissions from HGVs at the port, we had already introduced a more efficient traffic management system to streamline HGV arrival and provided new, more efficient access to our Eastern Docks and Town Quay sites. We also continue to run our effective ‘no idling’ campaign, reminding drivers to switch off their engines when not moving.

We continued our programme to introduce electric vehicles to the port, bringing the total of ABP Southampton’s fleet of electric vehicles (EVs) to 28, and we have now rolled-out over 70 charging points across the port, encouraging colleagues and visitors to think green. The charging points can be found at all four of Southampton’s cruise terminals as well as at ABP Southampton offices. ABP will continue to progress this. We are on track to make all possible vehicles EV by the end of 2020 and we continue to explore options for vehicles where no EV version is currently viable, for example, in minibus design.

During the previous year or so, we have also worked to support partners and customers in their efforts to drive better air quality. We welcomed news that DP World, which operates Southampton’s Container Terminal, has introduced 12 new hybrid straddle carriers, which use 20% less fuel than standard straddle carriers. In addition, Solent Stevedores has also introduced 33 new electric forklift trucks, which are used for cruise operations.

In June 2019, ABP and Solent Stevedores announced the completion of an extension to their rail terminal, allowing two 645-metre container trains to be serviced simultaneously, doubling the amount of daily trains this rail terminal can handle, from 5 to a maximum of 12, equating to an increase from 60,000 container rail freight moves per year to a potential of 180,000. As well as adding to the efficiency of the terminal, with over 25 trains from other freight rail terminals, it also means that more container traffic can be moved by rail instead of road. In using rail transportation, the Port of Southampton reduces its carbon footprint, now saving over 500,000 lorry movements every year. NO2 emissions per container are 80% less by rail than road.

ABP continues to work with partners to provide better incentives and capacity for handling even more freight on the UK’s rail network.

We have also welcomed more vessels powered by Liquified Natural Gas (LNG), which negate the oxides of nitrogen and sulphur, as well as particulate matter.

Southampton customer Wallenius Wilhelmsen, which is a key Southampton operator for Ro-Ro, exporting cars to countries across the world, has docked a number of High Efficiency Ro-Ro (HERO) vessels at Southampton.

The HERO class vessels have set new benchmarks in energy efficient worldwide automotive shipping with the difference being a more efficient exhaust gas cleaning system. It removes 70% of particulate matter from the air, reducing sulphur content to less than 0.1% of exhaust emissions.

Our people also want to play their part, and ABP has encouraged port staff to cycle in to work, with the creation of a new cycle highway. In summer 2019, 550 metres of cycle highway was completed, linking Dock Gate 20 with the City SCN1 Western Cycle Freeway. As well as the cycle highway, a larger bike shed had been completed, allowing greater provision for bike storage. The shed also provides an additional area of biodiversity, as the roof was designed to be used as green space to provide habitats for wildflowers and locally pollinating insects.

Looking more widely, we continue to generate our own electricity from our on-site solar projects, which provide us with clean power to decarbonise our own supply. In 2018, we generated and used around 1.5GWh of clean energy, which was 13.6% of all the electricity we used. Whilst this doesn’t impact local air quality per se, it makes our operations more sustainable and with some of our power now regularly coming from our own renewable sources, it helps to decarbonise the wider UK. We’ll know how we performed in 2019 at the end of the year, but early indications are very encouraging. In a similar vein, we have also continued to upgrade all our high-mast lighting to use low-power LED technology, which further reduces our reliance on the national grid.

“We are on track to make all possible vehicles EV by the end of 2020 and we continue to explore options for vehicles where no EV version is currently viable.”

Looking further ahead, in addition to the measures we have already implemented, we will continue to explore providing shore power for visiting vessels. Also known as ‘cold ironing’, this provision would allow certain large cruise liners to connect to our power supplies rather than run their engines or their own generators whilst they are alongside. There are financial and technological challenges to providing this kind of infrastructure and we continue to work to overcome these. We believe cold ironing could be another part of the air quality puzzle and we still hope to be thefirst UK port operator to progress it in 2020.

Although we have achieved a great deal in the time since we launched our air quality strategy, we know there is more to do. And ABP is committed to maintaining this momentum.