The UK’s Port of Lowestoft is quickly becoming one of the UK’s renewables hubs, writes Ron Crean, ABP Group Head of Marketing.

Situated on the East Coast of England, directly opposite major Continental ports, the Port of Lowestoft serves the busy sea routes between the UK, Europe, Scandinavia, and the Baltic States.

Together with ABP's other two East Anglian ports, King’s Lynn and Ipswich, it contributes £360 million to the UK economy every year, supporting 5,300 jobs nationally. The Port of Lowestoft also provides excellent transport connectivity for its customers, as it is linked to the M11 and M1 and has adjacent rail links. It is also in close proximity to the nearby Norwich Airport, which is linked to destinations in Europe as well as the UK.

Famous for being the offshore wind energy capital of the UK, the East Coast of England is making the location of the port an even more attractive option for potential investors, suppliers, large utilities and small and medium businesses.

The ‘East of England Plan’, published by the Government Office for the East of England, has set an ambitious target of 44% of the region’s electricity to be produced from renewable sources by 2020. This means that while the Port of Lowestoft is already home to a wide range of modern operations and maintenance facilities and a substantial fleet of offshore support and crew transfer vessels, it will continue to improve its offering to offshore wind industry customers. 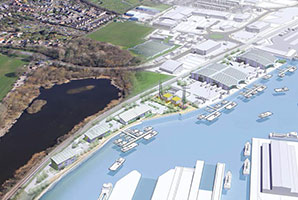 Throughout the years, ABP’s Lowestoft team has provided support for a range of high profile offshore wind energy projects, including the construction of the Galloper Offshore Wind Farm and operations and maintenance of the Greater Gabbard and East Anglia ONE Offshore windfarms.

With a growing reputation as East of England’s Renewable Energy Hub, the Port of Lowestoft has built expert teams and the right facilities to accommodate complex demands, placing the requirements of the offshore energy sector at the heart of its strategy.

One of the key offshore renewable energy projects at the Port of Lowestoft was the recent completion of a two-year contract to support the construction of the Galloper Offshore Wind Farm, a 353MW windfarm project located 30km off the coast of Suffolk. During the construction, ABP worked closely with James Fisher Marine Services (JFMS) as key partners in delivering the project. In the last five years, JFMS has invested heavily in the East of England, establishing itself as a strong local employer.

Its Lowestoft renewables base opened in 2017. JFMS’ landmark £25 million marine support contract for the Galloper Offshore Wind Farm created more than 100 jobs at the operational base, where it prepares transit facilities, organises crew transfer and supplies and manages multi-support vessels.

The Galloper Offshore Wind Farm is now in full operation and generates enough green electricity to power the equivalent of around 380,000 British homes every year. The construction of the windfarm has created almost 700 UK jobs, 90 of which are long-term jobs in the local area.

Through its day-to-day operations and power generation, it continues to support energy security in the UK and power the economy of the region.

The Port of Lowestoft is also home to the Operations and Maintenance Base for the Greater Gabbard Offshore windfarm.

The long-term collaboration between SSE and ABP on this project began in 2012 and is projected to continue to positively contribute to the local economy for decades to come. Greater Gabbard is a 504MW windfarm located 23km off the coast of Suffolk in England, representing a £1.5 billion investment.

Onshore construction activities commenced in early July 2008 at Sizewell and were completed on 7 September 2012. The investment has delivered 140 turbines capable of providing enough renewable energy to supply around 530,000 homes each year. The £1.5 million operations base in Lowestoft employs round 100 people, thus contributing positively to the local economy on a long-term basis.

In March 2018, the Port of Lowestoft agreed a 30-year deal with ScottishPower Renewables (SPR) to become a construction and operations hub for its East Anglia ONE offshore windfarm. 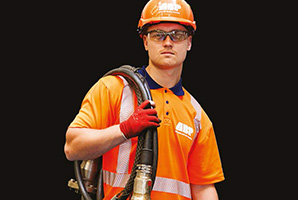 SPR, which is planning four offshore windfarms off the East of England, is developing a new operations and maintenance site adjacent to Hamilton Dock, leased from ABP to support its three-decade operational lifespan, as well as its construction.

Earlier in 2018, the Port of Lowestoft contracted with SPR to provide the marine based facilities which will serve the O&M base at the port. As part of this project, ABP will be constructing vital land-side utilities and pontoons to enable the operation of crew transfer vessels from Hamilton Dock, working with contractor McLaughlin & Harvey to design and build the facilities.

Charlie Jordan, project director for East Anglia ONE at SPR, commented: “Lowestoft is going to be the home of our windfarm for the next thirty years, so it is pleasing to see construction work underway at the port.

“The new facility will be a hive of activity for engineers and technicians and will be the base for our marine operations to support the day-to-day operations of the windfarm.”

Once East Anglia ONE is completed, there will be about 100 full-time jobs at the Port of Lowestoft, with thousands of supply chain operators and contractors using the site each year. This project will also allow ABP to continue to support the prosperity of the local community, affirming the Port of Lowestoft’s place as East of England’s Renewable Energy Hub.

In May this year, ABP showcased the broad range of business development opportunities available at the port at the East of England Energy Group (EEEGR)’s Southern North Sea Conference. Guests at the conference were invited to find out more about how the development site available on ‘England’s Energy Coast’, combined with ABP’s expertise in the offshore energy sector, could best serve their business needs.

During the flagship conference, ABP unveiled its vision for future development, developed in partnership with acclaimed London Architect, Chetwoods. The presentation included visuals illustrating the business potential of the Port of Lowestoft’s 13-acre development site, which has direct quay access and has become available since March 2018. A wider marketing campaign is due to take place later this year.

With a proud history of serving the offshore energy sector and a strong commitment to excellence, ABP’s team has built strong relationships with key customers including SSE, James Fisher Marine Services and most recently Scottish Power Renewables, providing ABP with the necessary expertise to continue to affirm the Port of Lowestoft’s place as the East of England Renewable Energy Hub.

With renowned energy companies such as Vattenfall putting forward ambitious plans for East Anglia, including the proposed development of a 1.8 gigawatt (GW) offshore wind farm called Norfolk Vanguard, the renewable future of the region looks bright.

Going forward, ABP’s development strategy is to continue to invest in infrastructural improvements and attract more offshore businesses. The unique offer ABP makes is that no one can get them closer – proximity is a useful advantage which helps businesses through all the cycles of renewable energy projects, from planning to build and repowering.