Growth in agribulks trade in Newport

Growth in agribulks trade in Newport Between 2009 and 2017, the Port of Newport saw the amount of agribulks cargo it handles increase by 170%. But why does this important sector continue to grow at the port?

The Port of Newport is one of five ports owned and operated by ABP in South Wales. Located on the south east coast, the port is ideally located to serve a wide hinterland that reaches the UK’s main industrial and commercial areas.

Traditionally, the port has been known for handling a large amount steel, both imports and exports, and this is still the case.

However, in recent years, the agribulk sector has been steadily growing and now has just as much presence at the port thanks to a dedicated terminal at North Side, South Dock.Between 2009 and 2017, Newport saw its agribulk operations increase by 170%, as the tonnage handled by the port increased from 139,329 tonnes per year to handling 377,090.The agribulk sector at the port mainly consists of imports of bulk fertiliser and animal feed.

To break this down even further, in 2017 the port saw a yearon year growth of 14% in bulk fertiliser imports and a 54% increase in animal feed imports in comparison with 2016. to the Welsh economy. 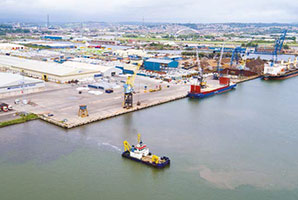 Agriculture is a vital industry for the economy of Wales. A recent Welsh Government report found that, as of 2016, 88% of the land area of Wales was being used as agricultural land. The study also noted that due to the climate and soil quality, growing crops in Wales can be difficult, which further highlights the importance of fertiliser and feed imports to support the sector.

There is an estimated workforce of 58,500 people employed on farms in Wales, which is 4.07% of the Welsh population and is notably higher than the UK average of 1.4%. The sector has also been identified as a Key Priority Sector by Welsh Government due to its economic significance for the country.

The Port of Newport handles around 2.2 million tonnes of cargo a year, supporting 3,000 local jobs and contributing £186 million per annum to the Welsh economy.

As international trade becomes more accessible to a wider range of businesses, the significance of local ports and their multimodal transport links continues to grow. The priority for ABP, as a port owner and operator, is to support industries that benefit the wider community of its ports.

Ralph Windeatt, Port Manager, ABP Newport said: “The Port of Newport is known for being very proactive in its approach to investing in port customers.For the agribulk sector, our investments are driven by the needs of not just the businesses of our customers, but also the local farmers, feed mills, and other industries they support.

This is to ensure this huge supply chain can continue to benefit from ABP’s services for many years to come.”Ports are defined by their location, so perhaps it’s no surprise that the agribulk sector has found a comfortable home at Newport. Outside of the city centre, the ports hinterland is dominated by Welsh farmland, as well as farmland in the Midlands. But the growth of the sector at the Port of Newport is not a coincidence. It is the result of strategic planning.

The rapid growth of this sector meant that in 2015 the port operator had to start planning the immediate construction of new quayside warehouses to support the growing supply chain. As of August 2018, ABP has invested in the construction of additional 107,000 sq ft of new covered storage space for the sector at the port of Newport.

In 2016, ABP invested £2.3 million into the construction of a 37,000 sq ft warehouse for the agribulk sector along with new weighbridge facilities. The warehouse is now known as 20 Shed and is currently being fully utilised by agribulk cargo. 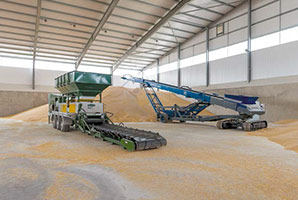 Work has also recently finished on a warehousing project that marks an investment of £4.5 million. This new warehouse, known as 21 Shed, will provide even more storage space in the form of a 70,000 sq ft covered bulk storage facility. As part of this project the port will also be investing in new plant equipment.

The Port of Newport also has the added benefit an in-house team of stevedores. All of the port's stevedores are experienced operators that have a real commitment to the service they provide. The operations team works closely with customers in order to improve efficiency of discharge by keeping communications open and honest.

By their nature, ports are constantly evolving to accommodate changing market trends so operational flexibility is crucial to their success. Ports in Wales are vital gateways for both regional and national employment and are served by distribution chains that span the globe. By working closely with customers, and staying ahead of trends, the port of Newport has remained a port that proudly serves industries that are vital to the economies of their hinterland.

377,090t Agribulk operations increased by 170%, as the tonnage handled by the port increased from 139,329 tonnes per year to 377,090.
3,000 Local jobs supported by the Port of Newport, contributing £186 million per annum to the Welsh economy
£2.3M invested into the construction of a 37,000 sq ft warehouse for the agribulk sector along with new weighbridge facilities.