Benedict McAleenan, head of Biomass UK, which is part of the Renewable Energy Association, lays out why ports are vital to the future of biomass energy, which is the UK’s second largest source of renewable energy generation.

What was the UK’s second largest source of renewable power last year? It wasn’t, as most people guess, wind or solar.

Wind was the leader, generating around half of our renewable power supply, much of which came from offshore wind farms, supported by infrastructure and skilled workforces in ABP’s ports such as Grimsby and Hull.

It was biomass that came second, generating nearly a third of our renewable power. To put that in context, that’s around 8-9% of the UK’s total electricity supply. Solar panels generated just under 12% of renewable power. But it’s important not to see these technologies as competing with each other. The real challenge is to understand how they work in concert to keep costs and carbon down. Bioenergy is crucial to our energy system because it backs up wind and solar, helping the power grid to flex with increasingly complex supply and demand curves. It also provides a range of industrial benefits, with ports at the heart of the story.

Ports are central because most of the biomass we use is imported through hubs such as ABP’s Port of Immingham. Around 7 million tonnes of biomass pellets are imported into UK ports each year, just for Drax Power Station in Selby, North Yorkshire. This will increase as new biomass power stations come online (Lynemouth earlier this year and MGT Teesside soon). The benefits are manifold: investment in UK trading infrastructure; reinforcement of trading relationships; supporting jobs, especially in industrial hubs such as North East England; technology innovations from shipping to air quality; and supporting a smoother transition from coal to low-carbon renewables. 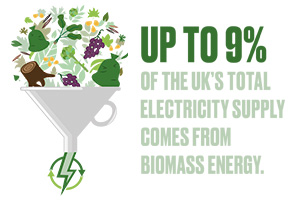 The most important benefit of bioenergy has been underlined repeatedly this autumn, with independent reports from the Intergovernmental Panel on Climate Change, the International Energy Agency and the UK’s Energy Technologies Institute. All restated the centrality of bioenergy for decarbonising the world’s economies. By combining bioenergy with carbon capture and storage (known as BECCS), we could actually remove carbon from the atmosphere.

But we won’t get there if we don’t invest in the bioenergy infrastructure on which BECCS will depend. The government’s taskforce on carbon capture said in 2018 that regional hubs will be vital to making it all happen. With the North East of England an obvious candidate for this, ports such as Immingham will play a long-term role.

Starting out as unwanted, low-grade forestry by-products, biomass raw materials are pelletised and then shipped to the UK. They’re received by specialist facilities at the port, loaded onto trains or lorries and brought to facilities like Drax. Through its conversion from coal to biomass, Drax has transformed itself to become the biggest decarbonisation project in Europe and the UK’s largest renewable generator. By using biomass instead of coal, it has cut its carbon emissions by more than 80%. Add on bioenergy carbon capture and storage (BECCS) in the future at Drax (it is already trialling the technology), and the power station could deliver negative emissions, meaning the electricity it generates will help to reduce the amount of carbon accumulating in the atmosphere.

Through support for biomass, Britain has become a world leader in the technologies and the regulations needed to ensure a low-carbon supply chain. This is being studied throughout the world as other nations seek to create stable, low-carbon energy systems. Just like the UK, those countries are often looking for more abundant bioenergy resources than their own landscapes provide, which means turning to the global shipping and ports system to access the ‘wood baskets’ of the world, especially the US and Canada.

The resources available in North America are vast; the working forests supplying Drax in the southern USA are three times the entire landmass of Great Britain. You can drive for hours without seeing anything but trees. And they’re growing faster than they’re being harvested, with annual net growth of around 0.7-1%. Foresters there manage growth rates to ensure constant net growth and to prevent land being turned over to urban or agricultural use. Their priority is supplying high-quality timber for buildings and furniture. Woody material that they can’t use because it’s misshapen, diseased or too small, they often burn on site or leave to rot. The alternative is to sell to industries such as pulp and paper or bioenergy. With many paper mills shutting down, bioenergy provides a profitable alternative revenue stream for the forest. Put simply, bioenergy helps keep forests as forests. As a result, standing stocks in the southeastern USA have more than doubled over 70 years. There’s a similar story in Canada and the EU.

So a waste product becomes a way to replace fossil fuels in our energy system and a way to support international forestry.

However, this isn’t the end of the low-carbon story. By regulating the entire biomass supply chain, the UK ensures bioenergy provides a genuine reduction in emissions. UK-based generators have their supply chains, from forest to power station, independently audited and they must show a cut in emissions of at least 60% compared to fossil fuels. That requirement is growing far stricter in coming years, creating extra incentives (and funding) for shipping to decarbonise through bold technological advances.

Through British ports, we can access the world’s forestry resources in a way that supports forest growth, lowers emissions and drives industrial innovation. This isn’t temporary or transitional. As bioenergy becomes an accepted commodity for energy systems around the world (as the IEA and IPCC suggest), and as BECCS technology becomes a scalable reality, global shipping will play a central role. It’s a long-term partnership.