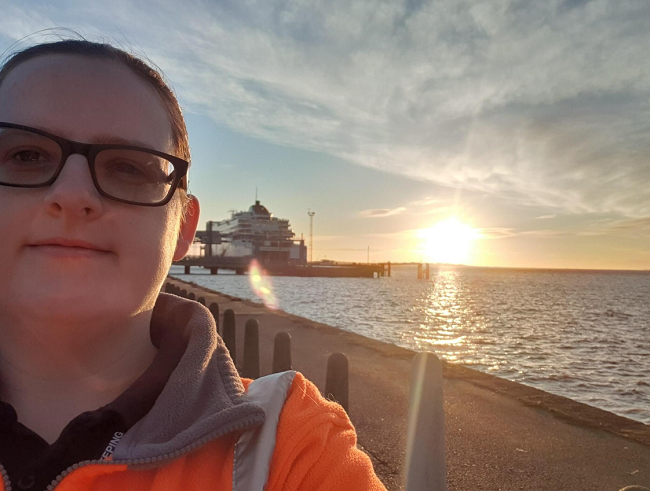 Before joining ABP, I worked full time as a hotel contract and administration supervisor for a coach holiday company. I had worked there for 9 years straight out of college, as I was unsure of what I wanted to be, so when a full-time job became available, I took it. It was an office-based job and each day was pretty much the same. So naturally before joining ABP, I had zero knowledge of the ports and how they operated.

What did you find most appealing about an Apprenticeship at ABP?

I first heard about ABP when I was looking for a change in career. I thought the best way to switch would be to do an apprenticeship, as you can earn money whilst you’re learning. Most of the apprenticeships I saw were very low wage and only focused on one thing, and after doing one thing for 9 years I wanted something more varied. This is what I liked when I saw this apprenticeship, as it covered a wide range of roles and could lead to plenty of opportunities within the port, all whilst earning a reasonable wage, which didn’t mean being stuck indoors every day.

What does a typical day at work look like for you?

One thing I learnt straight away was that there isn’t a typical day. There are four ABP ports on the Humber, which I could be working at and each one has different restrictions, types of goods and different ways of running things. I also get to see many different departments during the apprenticeship such as Vessel Transfer Services (VTS), berthing, pilot launches, engineering support, hydrography and dredgers.

I have been lucky during the Covid-19 pandemic to still be able to continue my apprenticeship normally. To reduce the risk, ABP implemented restrictions and safety guidelines. In some respects it has accelerated our training as we have been able to cover people who have had to isolate or have retired, meaning we get more hands on experience and responsibilities, which we may not have received otherwise.

I am currently looking forward to going back to the port after college and beginning my familiarisation with Salt End. Here, I will be on fire watch duty and be responsible for raising the alarm for any emergencies that may arise, such as fires, oil spills and gas leaks. I am also hoping for an end to the restrictions in force with Covid-19, so that I am able to go more easily to other departments, such as VTS and pilot launches. It would also be great to be able to visit some other ports around the UK, which hopefully will be possible later in 2021.

I would advise anyone who is not sure of what they want to do when they leave school to really consider an apprenticeship. When I was at school, because the teachers thought I was ‘academic’ and that I should go down the college and university route, I wasn’t told about apprenticeships. I wish I had known then what I know now as I would have done things a bit differently. To people who have full-time jobs but are looking for a change, it’s never too late, just find the way that works best for you and it will happen.